If you were charged with extortion at the federal level, The Law Offices of Tad Nelson & Associates may be able to help you. Extortion is a criminal offense based on the instillment of fear in the victim by some form of leverage. In some extortion cases, blackmail is the conduit, in others, protection, while other examples may involve kidnapping/ransom scenarios. 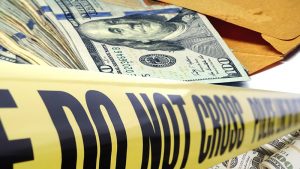 Extortionary tactics, or shakedowns, can take many forms, all of them illegal, and all of them involve using leverage against the victim for the benefit of the perpetrator. Threats of violence against business owners are often the basis of extortion and are usually indirectly implied rather than overtly implicit.

One example of a shakedown could be “protection money” like seen on crime dramas.

The victims of these crimes are often in fear of their lives or in fear of the perpetrator making good on threats of violence or property destruction. This serves as a strong bargaining chip for coercing business owners into complying with extortionary demands.

Business interests are often subject to extortion by corrupt politicians.

Other forms of extortionary acts may not imply or involve violence at all but have more of a white collar, and quid pro quo savor to them.

A business owner may need a permit approved, or an old agenda revitalized, only to find that the person in the power position needs “a favor.” This individual could be subject to an investigation by the FBI only to be followed by federal corruption & extortion charges.

Information can be cited as leverage by law enforcement.

Blackmail is an age-old form of extortion empowered by a threat of disclosing sensitive information. Blackmail is common among public officials, the entertainment industry, and the financial industry.

If a person’s career can be destroyed, them embarrassed, or a company destroyed as a result of the disclosure of sensitive information, the leverage for extortion exists.

When defending a person or persons accused of extortion, we have several defense strategies at our disposal. Many times there is insufficient evidence available to the prosecution, hindering their case.

In some cases, people are extorted based on a threat to accuse them of extortion, a form of blackmail with dynamic evidence. In some cases, claims of extortion aren’t correctly prescribed, leaving legitimate business practices clear of wrongdoing.

If you think you’re under investigation for extortion, or if you were arrested for the crime, we can help. The Law Offices of Tad Nelson & Associates is a full-service criminal defense law firm based in Houston, TX. Our law firm is led by veteran criminal attorney Tad Nelson and former federal prosecutor Amber Spurlock.

We have the experience you’ll need on your side.