If you’re a service member that’s facing criminal allegations you deserve the best legal representation you can get. Former Judge Advocate General (JAG) & United States Air Force Captain Amber Spurlock is now a federal criminal defense lawyer, with her experience stemming from her role as a military prosecutor.

If you’re in need of a consultation with Atty. Amber R. Spurlock or Board Certified® Criminal Lawyer Tad Nelson, contact our office at 281-280-0100. 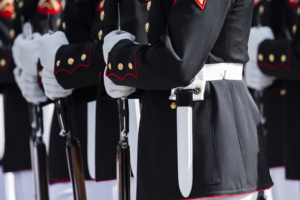 You’ve put your life on the line to serve our country. You deserve a legal team that’s dedicated to protecting your rights, and your freedom as your advocate.

Whether it’s a military criminal charge, or a criminal case in the civilian system, Attorney Amber Renee Spurlock is on your side. As a former Air Force Captain & and Judge Advocate General, we know the importance of protecting your rank, name, and your rights.

Whether you served as a Soldier, Marine, Coast Guardsman, Airman, or Sailor, you can rest assured that you have one the best qualified lawyers on your side.

The Law Offices of Tad Nelson & Associates doesn’t take shortcuts when serving veterans faced with legal challenges. We’re ready to represent you at Court Martial hearings, defend your rights during investigations, Article 15 hearings, and Separation Board hearings while keenly focused of claiming victory for you.

Standards of the Uniform Code of Military Justice

When a person is enlisted to serve our nation as a member of the U.S. Armed Forces they’re expected to represent excellence, liberty, justice and service.

When a service member is found to have acted contrary to this standard, and Article 15 hearing may be required. Although not the worst of circumstances, an Article 15 offense (similar to civilian misdemeanors) can lead to the defendant risking Administrative Separation (discharge) or being dishonorable discharged.

Our Military Defense Lawyers Are Ready to Defend

If you’ve been thrust into the stressful reality of a pending Court Martial former federal prosecutor Amber R. Spurlock is ready to sit down and discuss the situation with you. As a former service member, Atty. Spurlock understands the gravity of the situation, and the potential consequences that may follow a conviction.

We’ll fight for you.