In the United States millions of Americans enjoy their 2nd Amendment Right to keep & bear arms and this holds especially true in Texas. Although argued to be unconstitutional, there are numerous state and federal laws in place regulating the sale, ownership, and use of firearms. If an individual violates one of these laws, they may face state and/or federal criminal charges.

Criminal prosecution for firearm related crimes can be complicated. Sometimes, individuals who aren’t guilty of firearm offenses are charged, convicted, and severely penalized. It’s critical for anyone accused of a firearm offense to contact experienced criminal defense lawyer for legal advice.

It’s your right to retain a competent federal lawyer; exercise that right. The Law Offices of Tad Nelson & Associates is a federal criminal defense law firm. Call our Houston, TX law office at 281-280-0100 to schedule a 100% Confidential Consultation about your case.

Each state has its own firearms laws, some of which are more restrictive than others. Federal laws apply in every state and when an individual is charged with a federal offense, his or her case is handled by a federal court.

The federal firearms statute, 18 US Code 921(a)(3) defines a firearm as the following:

Federal firearms offenses include the following: 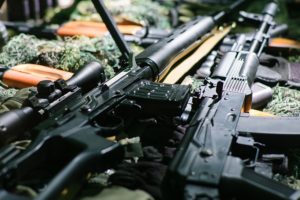 The penalties for a federal firearms offense are severe. They include the following:

For most individuals facing a charge of firearm possession by a prohibited individual, the maximum sentence is 10 years in prison and a fine of up to $250,000. However, an individual who is considered to be an armed career criminal, meaning that he or she has had at least three or more serious drug-related or violent crime convictions, can face a more severe sentence.

The penalties an individual faces for using a firearm in drug trafficking or as part of a violent crime depend on how the firearm was actually used. A standard charge of using a firearm in this manner, which means that the firearm was allegedly in the individual’s employ, has a penalty of at least five years in prison. Discharging a weapon in conjunction with this type of crime has a minimum jail term of 10 years and if the individual has been convicted of this offense previously, he or she can face 25 years or more in prison.

If you’ve been charged with a firearm offense at the federal level you’ll need an experienced federal defense attorney that can create a strong legal strategy for your case. The right strategy can mean the difference between having your charge lowered or even dismissed and being found guilty of a serious offense and facing substantial penalties.